Like many complicated diseases and disorders, cancer holds its own place. Cancer is not known to be caused by any foreign agent so a person cannot see it coming or cannot take any precautionary measures to help him to remain safe.

Cancer in general is abnormal rapid division of a cell; the number of the abnormal cells multiply to such an extent that it starts damaging nearby tissues and organs.

There are many different types of cancers as any cell in any part of the body can start dividing abnormally, may that be skin, blood or bones. The specific type we are concerned here is called Hodgkin’s disease or now it is known as Hodgkin’s Lymphoma.

What is Hodgkin’s Lymphoma disease? 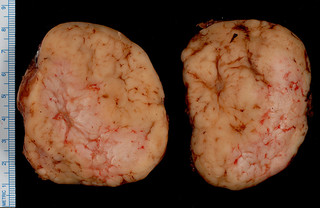 by euthman under CC BY

Lymphoma is a type of cancer that takes place in the Lymphatic system. There are different types of Lymphomas one of which is Hodgkin’s Lymphoma. First let me explain what Lymphatic system is.

Lymphatic system is very much like the normal circulatory system in our body. But instead of blood, Lymph flows through the lymphatic vessels. Lymph is the fluid that escapes from the blood through capillary walls mainly due to the high blood pressure produced by the pumping action of heat. The escaped lymph contains nutrients for the cells which are away from the capillaries.

Lymph also collects the waste material from those cells and is poured back into the blood stream for washing them out of the body. Lymph also contains a lot of white blood cells plays the lymph vessels pass through lymph nodules which contain cluster of different white blood cells.

The function of white blood cells is to kill any foreign particle that can cause infection. Lymph is very much regulated by the spleen but it also passes through liver for detoxification purposes. Lymph is found everywhere in our body such as muscles, under the skin and even in the bones.

Hodgkin’s Lymphoma is the cancer caused due to abnormal division of a specific type of white blood cell (WBC) known as Lymphocyte. The bad news about Hodgkin’s Lymphoma is that since Lymphatic system is a major part of circulatory system, the abnormal lymphocytes can easily spread to other lymph nodes and cause problem in them as well. The good news is that Lymphoma can be controlled especially if caught in the early stages.

The symptoms of a person suffering from Lymphoma start from unexplained itchiness, loss of appetite, unexplained loss of weight. Major symptoms are the enlargement of liver and enlargement of spleen, majority of times either one of these organs enlarge in size but in rare cases, both these organs can also be found to have increased in size. Person may see red spots on the body due to internal bleeding.

One major sign that points specifically towards Hodgkin’s Lymphoma is the appearance of swollen lymph nodes which are painless.

To pin point this disease there are a few procedures which are done to make sure if it is Hodgkin’s Disease a patient is suffering from or not. Mainly a biopsy of the swollen lymph node is done to check the amount of Lymphocytes , other than that the biopsy of bone marrow is also very important because the lymph fluid is found in the bones too, plus there are always lymph nodes around it, plus blood is tested for total lymphocyte count.

If the amount of lymphocytes increases from normal then it confirms the test to be positive. As for the treatment, two therapies are used; one is radio therapy which is useful if the cancerous cells are contained to one sight.

In radio therapy, different radiations are aimed at the cancerous part of the body to kill the abnormal cells. But chemotherapy is used when cancerous cells are spread over large area.

The tablets taken in can also be radioactive therefore when they are absorbed in the blood stream they kill the desired abnormal cells.

Hope now you know What is Hodgkin’s Lymphoma disease.