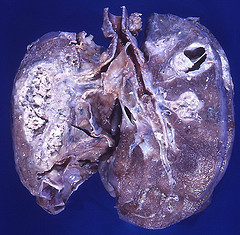 by Pulmonary Pathology under CC BY-SA

Medical sciences are one of the major parts of life since almost every one needs their assistance at one point at our life or another. Everyone gets it at some point, and that is when one cherishes the medical breakthroughs because Medical sciences have come up with many different procedures which can help diagnose the disease and also help in curing it through different medicines and procedures.

There are diseases like AIDS, and scientists know that this is caused by HIV hence research has been going on to create effective drugs and therapies, but then there are autoimmune disease and scientists have no idea what triggers them to start as there is no foreign particle that has been found to play a part.

Aside from autoimmune disorders many scientists are baffled by diseases such as cancer. Medical sciences have yet to find out how cancer starts, but they have seen a lot of success in controlling this disease from advancing to a fatal level if diagnosed early. There is always a combination of different therapies, which works against cancer cells.

In simple words, cancer is an abnormal growth of a specific type of cell. One cell will divide rapidly into many and the number multiplies each time, many cells at a point push and press against all the other tissues and damage them.

What is Hodgkin’s Lymphoma?

Lymph carries food particles to the cells which are not situated right adjacent to the capillaries. Lymph also collects the waste material of those cells and then is carried back to the heart through lymph vessels. Lymph also contains a lot of white blood cells which fight any foreign agent that can cause infections.

Lymph vessels pass through lymph nodules, as well. Lymph nodules are thick parts where there are a lot of WBCs present to fight against disease causing particles. Lymph is mainly controlled by the organ called spleen, but it also enters the liver for detoxification.

What happens in Hodgkin’s Lymphoma is that a specific type of white blood cell called Lymphocyte starts dividing abnormally. This phenomenon was first explained by Thomas Hodgkin hence it is named after him.

Like all other cancers, Lymphocytes abnormally multiply in number. Bad news about this type of cancer is that since it happens in the circulatory system, which is the Lymphatic system, it spreads very quickly because the abnormal lymphocytes migrate from one nodule to another.

The procedure of diagnosing this type of cancer is simple. Blood is tested for white blood cell count along with the biopsy of lymph nodes and the biopsy of bone marrow.

The treatment also follows the same pattern as any other cancer but of course with specific drugs. If the cancer has not spread and is in its initial stages then more emphasis is given to radio therapies, but if it has spread, then chemotherapy is used as well. Sometimes the infected organs need to be removed or transplanted.

But Hodgkin’s disease lymphoma therapies have seen a lot of success rate in past thirty years due to improvement of medicines and therapies.