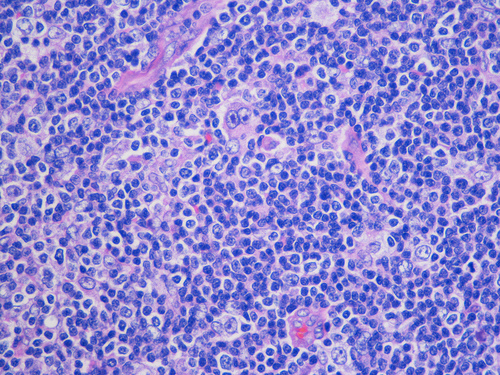 by cnicholsonpath under CC BY

There are different types of cancers. The Hodgkin’s Disease we are going to discus here is a kind of cancer that affects the lymphatic system .

Lymphatic system is also a circulatory system in our body. It does not circulate blood but it is mainly used to circulate lymph.

Then this lymph flows into the lymphatic vessels due to negative pressure. Lymph finally drains into the blood just before the opening of the superior vena cava; hence it joins back into the circulation. Lymph vessels also pass through lymph nodules which are spread all over the body. Lymph nodules contain many white blood cells. These white blood cells kill all the infectious cells.

There are also a lot of free floating white blood cells in the lymph. One of the major organs dedicated to the lymphatic system is the spleen. It is very much like the largest lymph nodule, only specialized. Lymph also flows through the liver.

In Hodgkin’s Lymphoma, there is an abnormal division of a specific type of white blood cell, known as lymphocyte. Now the bad news about any type of cancer in the circulatory system is that it can spread very quickly. The rapidly dividing abnormal cells can even reach the brain and cause damage. Therefore for Hodgkin’s Lymphoma, doctors use both kind of therapies, radiotherapy and chemotherapy.

Radiotherapy is mainly used to target the specific organs of the body to kill the abnormal cells if they are present there. Radiotherapies use specific types of radiations such as gamma rays as they have the most penetrating power.

Other than radiotherapy, chemotherapy also works because many medicines given are radioactive therefore when absorbed in the blood stream, they kill the abnormal cells. Due to the advancement of medical techniques, these therapies have shown more and more success rate. Nevertheless, all these therapies also cause damage to the healthy cells too.

Now let’s talk about the symptoms of Hodgkin’s disease. Mainly it starts with unexplained itchiness, loss of appetite, and unexplained weight loss. The patient can also have red marks on his skin due to internal bleeding. Major signs are either enlargement of liver, or enlargement of spleen; in rare cases both organs can also enlarge. One major symptom that can point to Hodgkin’s lymphoma is the appearance of lymphatic node which is swollen but is painless.

This disease now known as Hodgkin’s Lymphoma; is a disease first explained by Thomas Hodgkin, therefore the disease is named after him. Hodgkin’s disease is more common in males and it appears in the adult age starting from 24 years to 36 years of age.