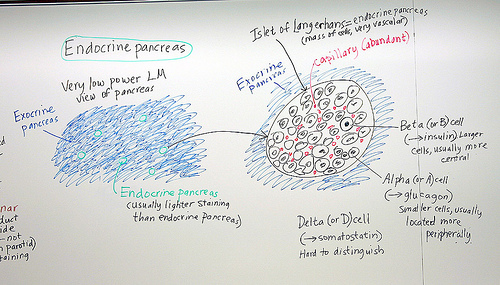 by Open.Michigan under CC BY-SA

Human digestive system is a science and mechanism in its own right. The digestive system of humans is naturally designed to carry out different roles among the alimentary tract. Pancreas is long structure that is located behind the stomach in an uneven shape. At this article we will explain main function of pancreas and provide list of common pancreas problems and diseases.

It has a function of secreting various enzymes and digestive juices into the small intestine which further helps the absorption and digestion of the food particles that we eat. Pancreas also secrets important hormone like insulin to keep the blood sugar level in check.

But if there is any kind of swelling that occurs and inflammation that happens in the pancreas, this condition is known as pancreatitis. The gland that is most dynamic in the duodenal system is pancreas, as it is quite often ignored and not proper attention is given to it when any health problem arises.

Pancreatitis is now has ever growing in patients mainly because of the deprived eating habits and non-healthy environments around us in this era and age. But now with the help of science and advanced research the doctors and surgeons have been successful in performing effective diagnosis and fruitful operations on the pancreatic diseases.

Whether a pancreatic cancer runs in the family or it’s just an out-of-the-way existence for a person a lot can be determined by the past of one’s own family and relatives so that one must be at a careful watch and pay attention to his or her health. A person can be measured to have a family history of pancreatic cancer if he has a parent or sibling with a blood relation.

Then comes the second degree relatives such as aunts, uncles, grandparents and cousins with pancreatic cancer even so that if there is only one relative with this history of cancer then such people are having a greater risk of hereditary inheritance of cancer. It is totally a critical disease and for which no initial exposure is possible.

At times the ultra sound report shows the tumor or growth of cancer but then there are times when even the ultra sound report doesn’t reveal the particular state. Even the doctors at the point have not yet formulized any method to grip the cancer cells in the pancreas in an early stage. No preventive measures have been chalked out by any medical research for hindrance of this deadly disease.

Sometimes heartburn can also be caused in patient as the pancreas is a specified organ which   is essential in the process of digestion and if there is any minor problem in the gland  then the food that we intake will not be absorbed and digested properly. But it is suggested by the doctors that if the pancreas has an inflammation then a person should have a pancreatitis diet probably prescribed by a doctor to further prevent the damage caused by the infection.

If a person has dangerous pancreatitis or suspects the disease then there are various pancreatitis foods available to dodge further damaging of the pancreas. Typically the dietitians propose fruits and vegetables for a pancreatitis diet. A person can cultivate a habit of eating a fresh vegetable or make a vegetable juice that can be taken quite accessibly and easily. As vegetables has the highest source of enzymes and minerals that are good in healing this disease.

Antioxidants which are chiefly plant based food are also good for the body. In fact the vegetable diet and fruit diet is not only good for pancreas but for the whole body itself. Spicy foods are also not suggested just the same way as the fatty foods.

Although some people are truly fond of food that is rich in spices as well as fat but it should be kept in mind that this kind of diet will only worsen the form of pancreatitis. Drinks such as fizzy sodas and all the sparkling drinks must not be taken too as they comprise high level of sugars which again can make it tough for the pancreas to digest. Caffeine in any form must be also taken in not too frequently as coffee has more side effects then benefits for a person’s health.

Rice and salads are included in the diet if the pancreas is inflamed. Cereals and oatmeal are also good and can be taken in a decent portion size. As long as the person is eating in normal regular intervals then the digestion will be also fine and no danger would be in it. This is so as the pancreas is getting sufficient time to work and absorb and digest the food.

The pancreas is undoubtedly the most fragile as well as important gland in the digestive tract and it is incumbent upon us to be extremely vigilant of the food that we take so that we can obstruct any type of impairment to the pancreas. Now you know main function of pancreas and list of diseases associated with this gland.