Fluid retention known as dropsy disease is never a comfortable feeling, particularly when it occurs in the legs, feet and ankles. Also known as edema, dropsy is a condition that causes the tissues within the body to swell and fill with fluid. 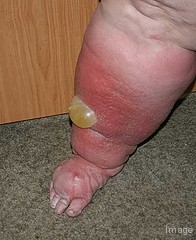 by wingedblue under CC BY

It is a common condition, and despite occurring mostly in pregnant women and the elderly, by identifying signs, causes, and available methods of treatment, it can be relieved.

This brief article aims to provide a better understanding of the complications resulting from dropsy disease, as well as provide common solutions to provide relief to those who suffer from this uncomfortable condition.

The Signs and Symptoms

This disease is often characterized by severe swelling and puffiness in the lower extremities, such as the legs, ankles, and feet, however, symptoms can be experienced within the face and hands as well.

Identifying the symptoms of this disease immediately is key to avoiding additional complications. In many cases, it can be a symptom and precursor to a more serious condition and therefore should be taken seriously.

Symptoms of shortness of breath, combined with respiratory difficulties and chest pain are normally indicative of edema occurring within the lungs.

This disease can be attributed to a variety of causes. The most common cause is small blood vessels, known as capillaries, that leak fluid after being ruptured or enduring excessive pressure. In this case, the kidneys then go into overdrive to absorb extra sodium and water to aid the damaged capillaries.

The capillaries then release additional fluid, which pools in the tissues and results in excessive swelling. This disease can also be attributed to excessive sitting, standing in the same position for tremendous amounts of time, consuming large amounts of salty foods, pregnancy, various medicines, sunburn, and even complications.

Despite the various factors that lead to the development of dropsy disease, it can be treated.

How to treat dropsy disease?

It can be treated, however, treatment often involves treating dropsy that it originated from. For this disease occurring within the legs and lower extremities, it can be offset by simply elevating those portions of the body to redirect blood flow; edema in the legs can also be alleviated through the use of support stockings as well.

Excessive sitting and standing for long periods of time should be avoided as well. Instead, periodic breaks should be considered to break the ‘routine’, thereby providing a variety of movement.

what is dropsy disease[signs of dropsy